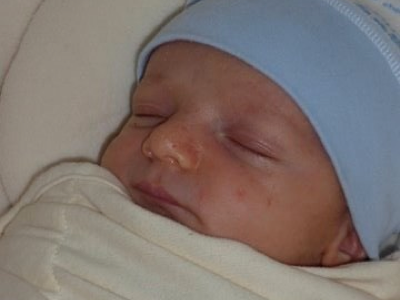 The current American Academy of Pediatrics recommendation for breast-fed babies is a daily 400 IU supplementation of vitamin D. If babies are receiving one liter or more of formula, no additional supplementation is needed since the formula is fortified with vitamin D. Researchers from the Center for Disease Control (CDC) reviewed the observance of these recommendations in a nationwide study of 16,389 healthy infants less than one year old. They found that most infants, not just those who are breastfed, did not meet the vitamin D supplement recommendation. The numbers were actually really low. The following are percentages of infants who received the daily 400 IU of vitamin D. A range is given that covers groups aged 1 month to 10.5 months:

I did my own survey of with a sample of one. My nephew and his wife were visiting over Easter weekend with their 3-month-old son from the San Francisco Bay Area. He was getting daily drops with 400 IU of vitamin D. GREAT! 100% compliance.

Next question addressed to his mother, how much vitamin D are you taking? She had been taking 2000 IU of vitamin D prior to pregnancy. On her first pregnancy visit, she was instructed to stop and only take prenatal vitamins, which she was still taking. Looking at the label’s fine print, the prenatal vitamins contain 400 IU. During pregnancy and breastfeeding, mothers need enough vitamin D to maintain a vitamin D level about 30 ng/ml. The only way to know your individual requirements is to check a blood level although there is insufficient evidence to support screening at this time.