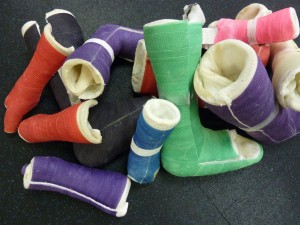 The risk of osteoporotic fracture ultimately depends on two factors: the mechanical strength of bone and the forces applied to it. When the force of an impact exceeds the strength of bone, the bone breaks.

How Many Broken Bones

In the United States over 2 million fractures occur each year in adults over the age of 50. Nearly 30% of those happen in men. About one in two women and up to one in four men over the age of 50 will break a bone due to osteoporosis.

Any Bone Break May Mean Osteoporosis

The skeletal sites of major fractures due to osteoporosis include hip, spine, shoulder, and forearm. However, any broken bones with the exclusion of the skull, finger, and toes, may be a result of osteoporosis that occur in adults over age 50.

Fractures Can Be Deadly

One Break May Lead to Another

Having one fracture puts one at high risk for subsequent fractures. A national health initiative called “2Million2Many” is focusing on stopping at one fracture and preventing any more from happening. Almost half of individuals who sustain a hip fracture have a history of fracture. If you or a loved one has had a broken bone over the age of 50, be proactive to decrease your risk of another fracture.